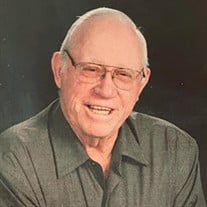 Cecil E. Miller, 86, of Tucson, Arizona, went to be with his Lord and Savior on Saturday, December 26, 2020 at his residence in Amber Lights, a senior-living community. Cecil was born on September 17, 1934 in Roswell, New Mexico. At the age of two, Cecil was placed in the Baptist Children’s Home in Portales, New Mexico. The Children’s Home became Cecil’s family. It was during this time, he attended the local public school, excelling in basketball and leading his team to the state finals. He also discovered his love for music and became active in the Portales music program. He graduated from Portales High School in 1953. He then enrolled at Eastern New Mexico University in Portales. It was here that he met and married the love of his life, Barbara and began their family. In 1958, Cecil graduated with a Bachelor’s Degree in Education. In 1959, he moved with family to Willcox, Arizona. In Willcox, he taught junior high and high school students in various subjects. Cecil also loved coaching football, basketball and tennis. Throughout his 30-year teaching and coaching career, he made a positive impact on students’ lives. He loved teaching and mentoring his students; however, he also had an overwhelming desire and the courage to begin his entrepreneurial journey. Barbara, who he was married to for 63 years was by his side supporting him in all his ventures. Cecil first started the Willcox Janitorial & Carpet Cleaning Service and purchased a 12-unit apartment complex. He then became interested in the bowling business, which led to the purchase of Kegler’s Lanes in Tucson, Arizona. After selling Kegler’s, he purchased Plaza Bowl in Prescott, Arizona in 1976. Once he retired from teaching, Cecil and his wife, Barbara, moved from Willcox to Prescott. With the Prescott community growing, Cecil saw the need for an additional bowling center, so in 1995, he built Antelope Lanes in Prescott Valley, Arizona. It was during the summers, the Miller family would take road trips across the U.S. and they also shared his passion for deep-sea fishing by traveling to Kino Bay, Mexico. In Kino, he could often be found on his boat hoping to catch the biggest dorado or yellowtail. These are cherished memories for the family. Not only was Cecil a loving husband, but a devoted father and grandfather, who gave guidance and support to his children and grandchildren. He leaves them with a legacy of love, hard work and perseverance. Cecil was predeceased by his two siblings: Starling and Ruby, along with his granddaughter: Jamie. He is survived by his wife: Barbara, children: Terri (Bill) Lackey of Tucson, AZ, Cara (Cheryl) Miller of Peoria, AZ, Brian (Kris) Miller of Prescott, AZ, grandson: Scott (Perla) Lackey of Tucson, AZ and many nieces and nephews. Cecil will be greatly missed by family, friends and all who knew him. He touched so many throughout his life. A Celebration of Life will be held by his family at a later date due to COVID 19. In lieu of flowers, the family requests that donations be made to the New Mexico Baptist Children's Home & Family Ministries, Box 629, Portales, NM 88130. These can be sent by mail or made online at NMBCH.com.

Cecil E. Miller, 86, of Tucson, Arizona, went to be with his Lord and Savior on Saturday, December 26, 2020 at his residence in Amber Lights, a senior-living community. Cecil was born on September 17, 1934 in Roswell, New Mexico. At the age... View Obituary & Service Information

The family of Cecil E. Miller created this Life Tributes page to make it easy to share your memories.

Send flowers to the Miller family.