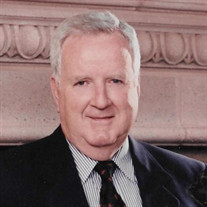 Dan was born in Tucson, AZ. He was proud of his Irish heritage, as the son of Helen Malloy and Daniel Joseph Lyons II. More than anything else, Dan will be remembered as a storyteller. “Things happen to me,” he said. “I’ve also been know to create a situation just for the hell of it too.” His stories were based on his life experiences. Dan attended Sts. Peter & Paul, Tucson High and University of Arizona, all great sources of material, rubber bands in the incense burner when he was a choirboy, sour orange fights in high school, hot rod races in college. In 1948, he took a summer job as a surveyor for the Pima Co Highway Dept. for $1 an hour. Dan served as a Private in the U.S. Army Corps of Engineers, stationed at Fort Belvoir during the Korean War, after which he returned to the U of A to complete his Civil Engineer degree. In 1957 he married Bettina “Tina” O’Neil and their 63-year magical, fun filled adventure began. Over the years, Dan had many work experiences, Southern California Gas Co., Hughes Aircraft Co., Pioneer Hotel, and Lyons Romo, Inc. Dan and a group bought the Pioneer in 1962 and started the Union Bank next door. He served as bank director and hotel manager until the Pioneer was sold. Dan and Andy Romo formed their company in 1977. They bought and sold real estate and syndicated land deals for many years. Dan and Tina loved to adventure travel, first motorhome trips with their 3 sons and friends to Mexican beaches, then backpacking trips in the Sierra Nevada Mountains and Grand Canyon, followed by hiking trips to Europe, South America, Japan and beyond. Dan loved his family more than anything in his life. He was proud of his wife Tina and supported all of her community endeavors. He loved his sons Dan, David (Pauline) and Stephen (Suzi), his grandchildren Davey, Greg, Henry, Nick and Lauren, and his sister Rita Touché (Albert), his niece Ann Carroll (Ray) and nephews Paul (Anne) and Philip. Dan always wanted an Irish Wake, but due to COVID this can’t happen. Please drink a toast to your friend Dan and fondly recall a story or two. Remembrances can be made to the Arizona-Sonora Desert Museum, where Dan served twice as board director.

The family of Daniel Joseph Lyons III created this Life Tributes page to make it easy to share your memories.

Dan was born in Tucson, AZ. He was proud of his Irish heritage,...

Send flowers to the Lyons family.