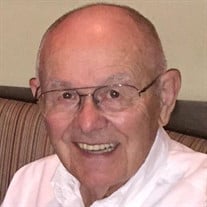 Edward C. Miller, 89, of Tucson, Arizona, went home to be the Lord on Tuesday, March 31, 2020. He was a loving husband, father, and grandfather, and will be greatly missed by his family and friends. We take comfort in knowing that he is spending eternity in heaven in the presence of Jesus, his Lord and Savior. Ed was born to parents Raymond W. and Esther R. Miller on April 8, 1930, in Huntingdon, PA. He graduated from Huntingdon High School in 1949, and afterward enlisted in the United States Air Force, serving from 1949 – 1952. Ed was stationed in Yokota, Japan, and was part of the 528th Aircraft Control and Warning Group. He was awarded the Korean Service Medal, UN Service Medal, and the Good Conduct Medal. After leaving the Air Force, he completed a Machinist Course at the Williamsport Technical Institute. In 1957 he was awarded a diploma for his completed studies in Machine Shop Practice and Toolmaking. He was then hired by Capitol Airlines in Washington, DC as a machinist. On April 7, 1956, he married the love of his life, Bernice E. Griggs. In 1961 they moved west to Tucson, Arizona where they would live out their lives together and raise a family. Ed Genuinely loved living in Tucson, which he often referred to as “God’s Country.” It was in Tucson, after working for Safeway Markets and then the U.S. Postal Service that he found what was to become his career. He joined the Prudential Insurance Company where he experienced tremendous success as a top producer because of his natural affinity for working with people as well as having a strong work ethic. Over his 20 years with Prudential, he was named Man of the Year multiple times, and was one of Prudential’s Million Dollar Producers. Ed is survived by his wife of 64 years, Bernice E. Miller, his daughters; Crystal Miller, and Yvonne Pisciotta (Perry), his grandchildren; Justin Rienzo, Eric Pisciotta, and Alicia Pisciotta, brother, Donald R. Miller (Huntingdon, PA) and all of Tucson, Arizona. Ed is predeceased by his parents, for brothers; John W. Miller, Ernest E. Miller, Frank C. Miller, and Raymond Miller Jr. Due to COVID Restrictions, there will be a private service held limited to family only.

Edward C. Miller, 89, of Tucson, Arizona, went home to be the Lord on Tuesday, March 31, 2020. He was a loving husband, father, and grandfather, and will be greatly missed by his family and friends. We take comfort in knowing that he is spending... View Obituary & Service Information

The family of Edward C. Miller created this Life Tributes page to make it easy to share your memories.