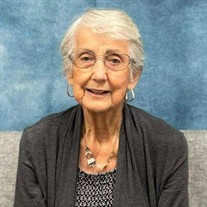 Eva Mae Swanson (Mikell) was born on March 5, 1939 on the farm in Bell (Trenton), Florida. She came from a large close knit family of 10 children and attended Trenton High School. Upon graduation, she moved to the big city of Gainesville, FL and worked as a bank teller. She met and married Rafael Rodriguez and after 10 years of marriage and four children they divorced in 1971. As a single mom, Eva did a fantastic job raising four children [Eva (Bill), Lori (Marty), Pete (Monica), and Joaquin (Lisa)], working fulltime, and attending college, all while being a diligent disciple of Christ to her children and her church. Weekends often involved chores and a visit to one of her siblings in Gainesville or taking her “city kids” out to the farm so they could experience her childhood country life with their cousins. In 1975, Eva met Steve Swanson while both working for the City of Gainesville and got married a year later. Steve whole heartedly embraced family life and his love of adventure and outdoors by introducing the joys of camping to Eva’s family. New job opportunities for Steve opened a new chapter in their lives. After departing Gainesville in 1978 they lived in diverse parts of the US such as: Thornton, CO; Sedona, AZ; Decatur, IL and finally Marana, AZ. Although these locations seem varied there was always a purpose, family. For example, Eva’s move to Sedona allowed her to be closer to three of her children and their kids. She and Steve spent many weekends in Phoenix and Tucson doing family events. While living in Decatur she was close to Steve’s family in Beloit, WI as well as her son in Chesterfield, MO and always jumped in to be a nurse or come down so Steve could catch the boy’s game. Eva enjoyed traveling and got several things off her bucket list including a trip to the Holy land and Ireland. The ability to travel with her friends made these events especially meaningful. In addition, there were the summer road trips to the Rockies and Wisconsin that allowed her to share her love of the outdoors with her kids and grandkids. She was never afraid to jump in the car to drive across country to see her sisters and brothers or kids. Otherwise, she was off to a farm auction with Steve to make sure he didn’t spend too much “on junk”. By far, landscaping was her greatest passion and her week would be filled with designing and working in her yard(s) where she would work the soil, tier the yard with large 6 inch beams she lugged around by herself, planting and replanting her yard because she didn’t like the way things looked. In addition, she would often be “hands on” with landscaping projects at her church grounds over the years as well. Upon Steve’s passing, Eva moved back to Arizona, even though she wasn’t a big fan of the desert, to be closer to her 3 children and her grandkids. Even here she was able to use her creativity to design and build her yard with a beautiful desert theme. Eventually the years of landscaping caught up with her and she moved into Watermark at Continental Ranch where she made several friends and kept the staff on their toes. She loved spending her limited time, before dialysis treatments, with the ladies from church or catching up with family. However, the afternoons were primarily dedicated to “her routine” that she followed like an Army general. Eva entered into eternal rest on October 10, 2021 at 2:30 p.m. She was preceded in death by her husband (Stephen). Eva is survived by her children and her sister Blanche Sanders and brother Tommy Mikell as well as her much adored grandchildren: Josh, Dahlia, Jade, Jared, Candida, Khole, Jordan, Elliott, Adrianna, Isaac, Hannah, and Chance and 8 great grandkids. Viewing will be held at Evergreen Chapel Monday, October 18, 2021 at 11:00 am followed by graveside committal service at 12:15 pm at Evergreen Cemetery located at 3015 N Oracle Rd. Flowers or a memorial card may be sent to Evergreen Mortuary and Cemetery.

Eva Mae Swanson (Mikell) was born on March 5, 1939 on the farm in Bell (Trenton), Florida. She came from a large close knit family of 10 children and attended Trenton High School. Upon graduation, she moved to the big city of Gainesville, FL... View Obituary & Service Information

The family of Eva Mae Swanson created this Life Tributes page to make it easy to share your memories.

Send flowers to the Swanson family.