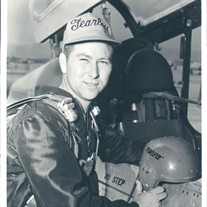 Horace J. (Mitch) Mitchell, Jr., 97, passed away peacefully, in his sleep, on the morning of April 17, 2020, at his home in Tucson, Arizona, after a 10-year battle with Parkinson’s disease. He is survived by his loving family: his wife, Joanie of 31 years; his daughters, Lynne Garner and Teresa Montgomery; his sons, Lee Mitchell and Steve Synnott; and his younger brother, Howard Mitchell. He was blessed with loving nieces and nephews, 8 grandchildren and 7 great grandchildren. He was predeceased by his father, Horace Jewell Mitchell, Sr.; mother, Eva Gertrude Mitchell; sister, Hazel Cummings; and brother, Robert Mitchell. He was born on October 9, 1922, in Carlisle, Arkansas, and born to fly anything that had wings! He not only was a barnstormer during his heyday but loved flying fixed wing aircraft such as the Curtis Biplane, Cessna 150, Cessna 172 and a Cessna 140 taildragger. He never met an airplane he didn’t like! He once said he could fly anything if he could get it going fast enough. He flew the P-38 Lightning, B-25 Mitchell bomber and the P-51 Mustang in preparation for the European Theater during World War II. During the Korean War, he flew the F-80 Shooting Star, F-84 Thunderjet and the F-86 Sabre. On one of his 200-combat missions, he was shot down by enemy fire but bailed out of his F-80 while in flames over friendly territory. His nickname, “Fearless”, was well earned. He flew the F-100 Super Saber in Germany and France. During the Vietnam War, he was a maintenance officer and test pilot for the F-105 Thunderchief. He was the recipient of an Air Medal and the Distinguished Flying Cross. After retiring from the Air Force, he owned a peach orchard in Grand Junction, Colorado. Thereafter, he co-owned the Land Air Flying Club based in Tucson with his brother, Howard. In 1996, he retired as chief corporate pilot from Golden Eagle Distributors, who were Anheuser-Busch distributors throughout much of Arizona. Mitch was an avid outdoorsman who loved skeet shooting, hunting and fishing. He was not mean-spirited, but had a very dry, witty sense of humor--just one of the things we all loved about him! All through his illness he never lost his sense of humor. We loved his “pet” nicknames and his mischievous grin. His caregivers over the years loved him like family. He kept us all feeling so endeared. He was a patient, kind, and generous real man’s man. He was our family HERO and a true American hero from the greatest generation. To ensure the health and safety of our community, we are following all guidelines set by local, state and CDC officials. A memorial service is pending at Evergreen Mortuary in Tucson. A committal service with full military honors is pending at the Southern Arizona Veterans’ Memorial Cemetery in Sierra Vista. In lieu of flowers, donations can be made in Mitch’s name to Disabled American Veterans at www.dav.org and/or The American Parkinson Disease Association at www.apdaparkinson.org. To ensure the health and safety of our community, we are following all guidelines set by local, state and CDC officials. Currently, we are only allowed 10 people at the service.

Horace J. (Mitch) Mitchell, Jr., 97, passed away peacefully, in his sleep, on the morning of April 17, 2020, at his home in Tucson, Arizona, after a 10-year battle with Parkinson&#8217;s disease. He is survived by his loving family: his... View Obituary & Service Information

The family of Horace Jewell Mitchell Jr. created this Life Tributes page to make it easy to share your memories.

Send flowers to the Mitchell family.