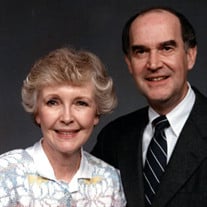 Mary Lou Duff of Tucson passed peacefully in her sleep early February 6, just three weeks shy of her 89th birthday in Tucson, AZ. She was predeceased by her husband of 63 years, Robert Earl Duff. Mary Lou was born in Gary, Indiana on February 28th, 1933 to Owen L Mullet and Ruth M Mullet. She was the oldest of their three children and has been preceded in passing by her parents, her sister Dorothy Jean Wright and brother John L Mullet. Mary Lou joined Robert Earl Duff in 1952 and was happily married to him until his passing in 2015. He was a well respected and successful United Church of Christ minister for many congregations throughout the Midwest and Southwest and Mary Lou was always at his side as his supportive and loving wife. Mary Lou is survived by her two children, Marcia D Quiroz of Tucson, AZ and Todd A Duff of the US Virgin Islands. She has six grandchildren and four great grandchildren. Mary Lou was a bright, energetic and sociable woman who lived in Indiana, Illinois, California, Texas, Michigan, Missouri, Ohio, Wisconsin and Arizona. She was very well read and would engage in intelligent discussions on a broad variety of interests. A superb cook who hosted many dinners for church related visiting celebrities, dignitaries and friends, Mary Lou was also a very talented knitter who made dozens of original design custom sweaters which were sold in high end boutiques in the USA and Europe. She was a gifted music major on the piano, an avid photographer, and a published poet. She crafted thousands of floral polyester resin paperweights which she furnished to exclusive gift shops nationwide. The single most memorable aspect of Mary Lou’s life however was her genuine interest and compassion for her friends and family. Her husband wisely encouraged her to pursue her own interests. Her friendships were deep and enduring. Her love and guidance for her children was immense, encouraging each in their independent directions. She is already terribly missed by all who knew her. They both specifically asked not to have a funeral, but a family memorial celebration of life will be held at a date yet to be determined. They were both interred at Evergreen Cemetery, 3015 N. Oracle Rd., Tucson, AZ 85705.

The family of Mary Lou Duff created this Life Tributes page to make it easy to share your memories.

Send flowers to the Duff family.