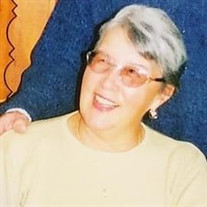 Patricia Ann Andrews passed away to GOD on Saturday, July 17th, 2021, at the age of 80, in the ICU of Northwest Medical Center in Tucson, Arizona. She is survived by her loving husband, Art Andrews, their son, Paul, their daughter, Stephanie (spouse Tim Smith); their grandchildren, Megan (spouse Scott Anderson), James, and Hollie (spouse Stephen Shindler), and their great grandchildren, Dennis and Daelan. Patricia was much loved by her in-laws, as well as her blood relatives. Her brother-in-law, Robert Mitchell Andrews, loved her very much, and when he passed away to GOD earlier this year, we think it was no coincidence that he did so on her birthday. Patricia was born on January 4th, 1941 to Robert E. and Mary E. Koons in Mechanicsburg, PA, and was graduated in 1958 from Burlington High School in that New Jersey city. She then commenced her medical training at the West Jersey School of Nursing in Camden, NJ, graduating in 1962 and earning her Registered Nurse (RN) designation on February 2, 1962. She started her professional nursing career as a staff nurse at the lower Bucks County Hospital in Bristol, PA in March, 1962 while also dating Art, who was then a law student at New York University School of Law. They were married in Burlington, NJ on July 21, 1963. Their dating and subsequent marriage produced a series of job changes for Pat, starting with her becoming a staff nurse at Burlington County Hospital in Mt. Holly, NJ. Thereafter, she was chiefly an operating room nurse in the Surgery Department of St. Vincent’s Hospital & Medical Center in New York City; Schoitz Memorial Hospital in Waterloo, IA; and St. Mary’s Hospital in Tucson, AZ, respectively. But there was about a 14 year gap in Pat’s nursing career between her time at Waterloo’s Schoitz Memorial Hospital (ending in 1967) and Tucson’s St. Mary’s Hospital (beginning in 1981). And the reason is not far to seek. Paul was born in 1966 and Stephanie in 1968, and most of the raising of them was done by Patricia. She also took care of her father in the final years of his life, and all of this precluded Patricia from pursuing her nursing career during that long time period. When she started the job at St. Mary’s in 1981, Patricia took on the night shift. After 10 years on the night shift, Patricia retired. But since she had a lot of the “caring/helping others” attributes in her DNA, she served as a regular, part-time volunteer driver for SAAF (the Southern Arizona AIDS Foundation) in its “meals on wheels” campaign for immobile AIDS patients, which (with my failing memory) I recall as lasting about 4+ years. Likewise, she became a volunteer in the St. Mary’s Thrift Store (which was a charity that substantially helped to support St. Mary’s operations as a hospital by accepting donations of various goods and materials and then re-selling them to its customers at low prices). Pat worked in, and later helped manage, the Thrift Store’s book department on a part-time, regular basis for approximately 10 years. Patricia was always doing and learning something. Activities which she particularly enjoyed were playing tennis, fishing, and bridge with (or against) her loving husband, Art. For her personal hobbies, she enjoyed—and was very good at—oil painting, pencil sketching, needle work, furniture refinishing, and swimming. As a seamstress, she made many articles of clothing and upholstery. She was a superb gardener, and extremely proud of being recognized by the National Wildlife Federation as making our residential grounds a habitat for wildlife. And, in regard to that, she was so upset by a cat killing a cardinal in our backyard, that she wrote a letter to the editor of the Arizona Daily Star entitled “Bell the Cats!” But she also loved pets, and for most of her life she had a dog in the house that she pampered. Patricia is also survived by her beloved dog, Mattie. In lieu of flowers, we ask that you donate to a charity of your choice, but if you also wish suggestions from us, that includes, in no particular order: The American Civil Liberties Union, or Tohono Chul Botanical Gardens & Galleries, or The National Wildlife Federation The memorial service (with Eucharist) will take place on August 21, 2021 at 1pm (Tucson time) at St. Philip’s in the Hills. Please come with masks in view of Covid-19 and its variants. Father Peter Helman will be presiding. There will be no reception at St. Philip’s in the Hills due to Covid protocols. The memorial service will also be live-streamed on the St. Philip’s in the Hills website: https://stphilipstucson.org/livestream The video of the service will also be posted later on the church’s YouTube page: https://www.youtube.com/channel/UCtmldh5sVqg9JzyictAlM2g

Patricia Ann Andrews passed away to GOD on Saturday, July 17th, 2021, at the age of 80, in the ICU of Northwest Medical Center in Tucson, Arizona. She is survived by her loving husband, Art Andrews, their son, Paul, their daughter, Stephanie... View Obituary & Service Information

The family of Patricia Ann Andrews created this Life Tributes page to make it easy to share your memories.

Send flowers to the Andrews family.