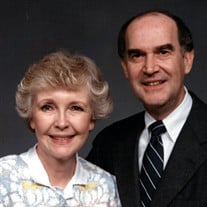 Robert Earl Duff passed away on May 28, 2015 in Tucson, AZ. He was born on September 26, 1931 to Lela B Bacon and Earle A Duff of Flint, Michigan. He was predeceased by his parents, and his two older brothers Donovan P Duff and William L Duff. He is survived by his daughter Marcia D Quiroz of Tucson, AZ and his son Todd A Duff of the US Virgin Islands. Bob, as he preferred to be known, was both athletically and academically inclined in high school in Flint Michigan and was well liked and popular. He was torn as to his direction in life. While in his final year of public schooling, he nearly pursued a career as a lawyer, but felt a calling to serve God and Jesus Christ and so went into the ministry. It was at the then Asbury College, a nondenominational Christian school in Wilmore, Kentucky, that he met his soon to be wife Mary Lou Mullet. Upon their engagement, they both moved to Michigan where Bob finished his undergraduate degree at Michigan State University and began his ministry at a small Methodist parish in rural central Michigan. Both of Bob and Mary Lou’s children were born while living in rural Michigan. In 1958 he accepted the ministry at Parkman Congregational Church in Ohio so that he could pursue a graduate degree at nearby Oberlin College which was, at that time, one of the top theological seminaries in the country. In 1961 Bob and Mary Lou moved their young family to Cleveland, Ohio where he took on the job as associate minister at the Euclid Avenue Congregational Church, a large and well respected UCC parish in an urban setting and upon the retirement of the head minister in 1962, he was promoted to head minister. He was fully ordained in 1966. In 1969 Bob became minister at Trinity United Church of Christ, an urban church in nearby Akron, Ohio. In 1972, he took the helm of the First Congregational Church in La Crosse, Wisconsin. Bob would come to a large church which was struggling with adjusting to new times or was suffering from falling numbers of parishioners and through his hard work he would ‘turn things around’ for a church, making it more relevant to the setting and constituents and solving such problems as large congregations can have when endeavoring to focus their resources to do the best for their communities and congregations. It seems that once things were ‘sorted out’ and working well, Bob would feel the urge to take on a new challenge and so in 1978, they moved to Sun City, Arizona where he took the job as minister of the Church of the Palms UCC. From the years 1983-1996 Bob served parishes of the FCC UCC Muskegon, Michigan, First Congregational Church of St Louis UCC, Missouri and First Congregational UCC of Eau Claire, Wisconsin. Upon retirement in 1996, Bob and Mary Lou returned to Sun City, Arizona where they lived until 2014. At that time, a joint decision between them and their adult children required a move to assisted living in Tucson so that their daughter Marcia could manage their care. Robert Earl Duff is greatly missed by all who knew him well, and upon his passing he asked for his remains to be cremated and buried with his loving wife Mary Lou upon her own passing. They both specifically asked not to have a funeral, but a family memorial celebration of life will be held at a date yet to be determined. They were both interred at Evergreen Cemetery, 3015 N. Oracle Rd., Tucson, AZ 85705. To send flowers or a memorial gift to the family of Mary Lou Duff Robert E Duff September 26, 1931 - May 28, 2015 please visit our Sympathy Store.

Robert Earl Duff passed away on May 28, 2015 in Tucson, AZ. He was born on September 26, 1931 to Lela B Bacon and Earle A Duff of Flint, Michigan. He was predeceased by his parents, and his two older brothers Donovan P Duff and William L Duff.... View Obituary & Service Information

The family of Robert E Duff created this Life Tributes page to make it easy to share your memories.

Send flowers to the Duff family.