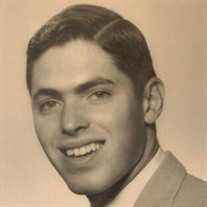 HIRSH, Sidney passed peacefully on Wednesday, December 9, 2020 at the age of 90. Sid was born on August 22, 1930 in Shamokin, Pennsylvania to Rose and David Hirsh. David owned a successful shoe store, The Bootery. For health reasons, the family moved to Tucson in 1944. After graduating from Tucson High, Sid attended the University of Washington in Seattle where he pursued a master's degree in history and met and married his wife, Marsha. In 1954, after service in the Army, they returned to Tucson with their newborn baby, Leslie. His mother, Rose had just opened a boutique children's store, Hirsh's Shoes. Sid began working there to support his now growing family with two more children, Alan and Jenny. Sid and brother-in-law, Bud Rosenbluth eventually took over the business, expanding with five additional stores, offering a diversity of footwear: children's, women's fashion, athletic/hiking shoes and dancewear. A certified pedorthist, Sid was passionate about helping his customers find the right shoes, including those with special needs in nursing homes and care facilities. Sid valued his family and community. He was a long-time member of Temple Emanu-El, the Lion's Club, Tucson Rotary, Arizona Historical Society, Southern Arizona Hiking Club, and the Sierra Club. In addition, he generously supported the arts. Sid and Marsha regularly attended concerts, symphonies, theater and his first love, opera. Music filled their home, a love and appreciation that was passed onto his children. A scare with a mild heart attack in the 1960's turned Sid's life around from being a chain smoker to adopting a healthy lifestyle of diet and exercise. He instilled in his children a love and respect for nature, taking the family on hikes in surrounding mountains every Sunday and summer vacations to National Parks. He became an avid hiker, runner and cyclist, competing in marathons around the world and leading Sierra Club backpack trips. On one such trip in Mexico's Copper Canyon, he met a Tarahumara man who introduced him to fast hiking. "He told us he was going down to the river, have lunch, talk with some friends and come back out that evening. It was about 35 miles. We started to wonder why we were taking four days to do what he did in one day." This inspired his most famed accomplishment, a rim-to-rim-to rim hike in the Grand Canyon, which started from the South Rim crossed to the north and then back in one day--a total of 50 miles and 20,000 feet! The event became annual and attracted world-wide attention after being featured in an Arizona Highways article. Sid was an inspiration to all. He will be most remembered for his 62-year legacy at Hirsh's Shoes, as he liked to say, "saving soles one foot at a time". The store, beloved by generations of Tucsonans, has been preserved and is now listed on a register for historic buildings. Family, friends, hiking companions and fellow rotarians continue to tell stories of adventures and misadventures on the trail with Sid. His affable personality, wit and intelligence made him a perfect conversationalist and companion when crossing a canyon, taking a morning walk, or just sharing a glass of wine. He has been loved by so many and will be missed by all. A rich and full life lived well. Sid is preceded in death by his daughter, Leslie. He is survived by his wife, Marsha; sister, Joan Rosenbluth (Bud); brother, Robert; son, Alan (Sally); daughter, Jennifer (Ed); cousin/daughter, Mary Zinkin (Debby); grandchildren, Michael, Joey, Ariana and Austin, and a large loving circle of dear cousins, nieces and nephews. A celebration of Sid's life will be held at a date to be determined. Donations in Sidney's name may be made to the following organizations: Aaron Shearer Foundation Center for Trauma Support Services Arizona Friends of Chamber Music Or a charity of your choice. Arrangements by EVERGREEN MORTUARY AND CEMETERY.

HIRSH, Sidney passed peacefully on Wednesday, December 9, 2020 at the age of 90. Sid was born on August 22, 1930 in Shamokin, Pennsylvania to Rose and David Hirsh. David owned a successful shoe store, The Bootery. For health reasons, the family... View Obituary & Service Information

The family of Sidney Hirsh created this Life Tributes page to make it easy to share your memories.

Send flowers to the Hirsh family.