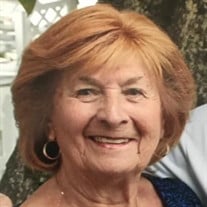 Sylvia (née Chinman) died peacefully in her home in Tucson, Arizona on November 14, 2020 surrounded by her children. Born in London, England in 1925, she would have enjoyed her 95th birthday next month. She was happily married to her late husband Bernard (Ben) Raskin, for more than 61 years, an American GI during WWII. Sylvia was the beloved mother of Heather Cleary, Stuart Raskin and Sherri Raskin and beloved Mother-in-law to Gail Raskin. She was the proud grandmother of Danika (Matt), Zachary, Chelsea, Darryl (Ty), and Rachel (Jacob) and the very loving GG (Great Grandmother) of Asha, Marlo and Dex. She was the oldest of four siblings and is survived by Paul (Betty), Jeannette and Sandra (Herb). Sylvia led a very full and happy life in America, following her husband on the 1st war bride’s ship in 1946. She became one of the founders of the British War Bride’s Club, which was a source of many friendships and one of her greatest social enjoyments for many years. She was followed to her new home in America by her Mum and sisters and afterwards by her brother and his wife. She was close and caring to her nieces and nephews. Sylvia came from a very loving and warm environment and her family meant everything. Although the kitchen was never her favorite place, she loved to get everyone together often to laugh, eat and reminisce. During her child rearing years, she was active in her children’s schools and her temple. Later, she joined various Jewish organizations and took on many charity charges. Sylvia moved to Florida from New jersey in 1980 and enjoyed a long and active retirement which included travel with her husband Ben. She learned to play golf and tennis once living in the Willow Bend community in Lake Worth Florida. One of her proudest days was hitting a hole-in-one. She continued to play golf twice a week until a few years ago. Sylvia was a very creative woman and sewed and knitted though out her life to the pleasure of her children, grandchildren and greats! If you saw Sylvia in her later years, she always had her knitting bag with her calling it her psychiatrist. Games were also her joy and she excelled at Mahjong, Canasta and the $5.00 table for Black Jack, when the opportunity arose. Sylvia was fun loving and always joined in. Sylvia was an incredible wife, mother, sister, grandmother, great grandmother and friend. She touched all of our lives in a beautiful way and will be missed, but lovingly remembered. In honor of Sylvia’s memory please consider making a donation to a charity of your choice.

Sylvia (née Chinman) died peacefully in her home in Tucson, Arizona on November 14, 2020 surrounded by her children. Born in London, England in 1925, she would have enjoyed her 95th birthday next month. She was happily married to her late... View Obituary & Service Information

The family of Sylvia Annie Raskin created this Life Tributes page to make it easy to share your memories.

Send flowers to the Raskin family.