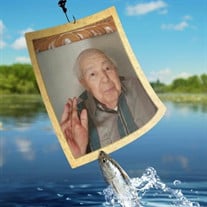 Thomas Arthur Benavidez Born 5/5/1935 Died 5/4/2020 Tommy was born in Rowe, New Mexico the second eldest of 11 children to Kathlina and Thomas Benavidez. Their family moved to Jerome, Arizona in the early 40’s and eventually settled in Miami, Arizona. Tommy’s fun and sometimes wild ways landed him the Army. He was stationed in Hawaii and sent to do his part for the USA in the Korean War. Tommy married Medith on March 22, 1957 in a small picturesque ceremony. Soon after, he gained employment with with Magma Copper Co. and they moved to Mammoth, Arizona where they had 3 children: Thomas Edward, Joseph Alvie, and Theresa Leigh. As a family they moved to a beautiful house on 1st Avenue in San Manuel. It was there that Tommy and Medith raised their children, watched their grandchildren be born and raised, and were able to retire. After retirement, in 1998, Tommy and Medith moved to Eager, Arizona where he could fish anytime he wanted. During his time as a miner for Magma Copper Co., Tommy was an active union member with United Steelworkers Local 937. He fought at the forefront of the 1980 strike to procure proper safety equipment for all miners above and below ground. Tommy was honored by Magma Copper Co. for 30+ years worked without a reportable injury, and retired after 42 years underground. Tommy’s hobbies included leatherwork, making jewelry, reloading ammunition, hunting, fishing, and camping. His favorite times were spent up north in the Greer area each summer fishing with his children, grandchildren, great grandchildren, and his siblings’ families. Tommy also enjoyed his time as a member of the American Legion, where he could be found making bucket amounts of his delicious salsa for their Labor Day Community Picnic. Tommy passed away peacefully with Medith, his devoted wife of 63 years, by his side. He is survived by daughter Theresa; daughter-in-law Nita; adoptive daughter Kathleen; grandchildren Jake, Tamyia, Tamanique, Daniel, Amanda, and Cole; 8 great grandchildren; brothers Joseph, Patrick, and Alex; sisters Molly, Frances, and Yolanda; and countless nieces, nephews, and cousins. Tommy was preceded in death by his sons Eddie, and Joey; brothers Phillip, Edward, and Angel; sister Dora; parents Kathlina and Thomas. Tommy will be missed, may his memory be eternal. Due to the unprecedented times, a memorial service will be held at the earliest date possible. To ensure the health and safety of our community, we are following all guidelines set by local, state and CDC officials. If you are planning on attending a service, please contact the funeral home in advance, so that we can plan accordingly.

Thomas Arthur Benavidez Born 5/5/1935 Died 5/4/2020 Tommy was born in Rowe, New Mexico the second eldest of 11 children to Kathlina and Thomas Benavidez. Their family moved to Jerome, Arizona in the early 40&#8217;s and eventually settled in... View Obituary & Service Information

The family of Thomas Arthur Benavidez created this Life Tributes page to make it easy to share your memories.

Send flowers to the Benavidez family.