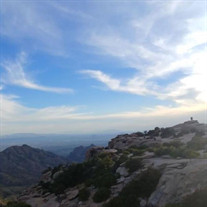 Timothy Wayne Selfridge passed away Thursday, October 29, 2020 after a long courageous battle with diabetes. Tim was born May 30, 1965 in Newburg, N.Y. to Gladys Faye and Henry "Hank" J. Selfridge. Tim graduated from Cactus High School in 1983 and entered the U.S. Air Force in 1984. He worked his way up to Tech Sergeant. In 1987, he married Elizabeth (Beth) Breen in 1987. Together, they are the parents of Jesse Jesus Selfridge and Mark Anthony Selfridge And together, Tim and Beth have 9 grandchildren. Tim is survived by his wife, Beth, his parents Hank and Faye Selfridge; sister Julie (Sky) Ardnt; brother, Steven (Priscilla) Selfridge; a host of nieces, nephews, and great nieces and nephews. An avid lover of all things Volkswagen; Tim restored various models of the Volkswagen Beetle, having just completed his latest project with the help of Chris Tatro, Derek Ulibarri and Gus Garcia. Tim was also a lover of his beloved Miniature Schnauzers. His pups brought home various awards and Best in Show prizes from various dog shows throughout the Western United States. A few of his prized pups are Jerome, Matilda, Chief, Shadow, Luci and Evita. Tim enjoyed fishing, especially the waters of Lake Amistad, near Del Rio, Texas. He was also an avid user of his metal detector, and often competed with his father, Hank, as to who would find the "neatest stuff." Tim was also a decorated civilian personnel member with Laughlin Air Base (Texas), including the coveted Daedalian Award. In lieu of flower gifts, Tim has asked donations be made to God's Garage in care of Washington Heights Church. 1770 East 6200 South, Ogden, Utah, 84405

The family of Timothy Wayne Selfridge created this Life Tributes page to make it easy to share your memories.

Send flowers to the Selfridge family.