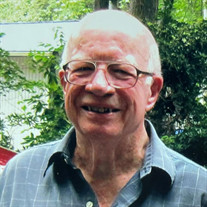 Born in New York, John always went by his middle name to friends and family. He grew up in Baldwin, New York, close to the Atlantic Ocean and Long Island Sound where he developed his love of sailing and the outdoors. John attended Chaminade High School in Mineola, Long Island, and went on to attend Stevens Institute of Technology where he received his degree in mechanical engineering in June of 1954. After college, he served in the U.S. Army from 1955–1957, working as a cartographic draftsman. After his military service, John took a position at the Picatinny Arsenal in Wharton, N.J., using his mechanical engineering knowledge to aid in the manufacture of cutting-edge ammunition for the Army. After 20 years working for the Arsenal, he went to work for General Electric in their N.J. headquarters. All during his busy career, John made sure to spend time with his good friends and loving family. He maintained a vibrant social schedule of ski trips and other travel adventures, and enjoyed dining out, action and adventure novels and movies, good scotch, cigars, and black coffee. He was a dedicated sports fan, and followed his favorite football, baseball, and basketball teams in person and on television. He was an avid skier until into his 60s, when a back injury sidelined his schussing down the slopes of various New England mountains. He was also an aficionado of of classical and flamenco guitar music, and collected many vinyl recordings of artists such as Manolo Sanlucar, Sabícas, and Carmen Amaya. Although he drove practical automobiles most of his life, he was always interested in antique and exotic cars. After retiring from General Electric, John moved to Ocean Pines MD to be closer to other family members who had relocated to that seaside community some years earlier. There he quickly surrounded himself with new friends, and maintained his connection to the ocean. In 2021 he moved to Tucson, Arizona, where he was finally able to enjoy in person his second cousin Stacey Beste's restaurant; much sunshine; and the company of both extended family and new friends. John is survived by his loving cousin Nancie Beste; second cousins Deborah Duffy, Patricia Cavanaugh, Valerie Magro, Kathi Beste, Stacey Beste, Eric Beste and their families; and many friends.

Born in New York, John always went by his middle name to friends and family. He grew up in Baldwin, New York, close to the Atlantic Ocean and Long Island Sound where he developed his love of sailing and the outdoors. John attended Chaminade... View Obituary & Service Information

The family of Walter John Longman created this Life Tributes page to make it easy to share your memories.

Born in New York, John always went by his middle name to friends...

Send flowers to the Longman family.