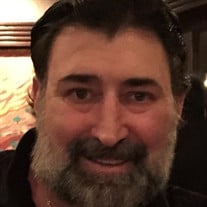 Scott Thompson died on November 27, 2019 at the age of 58 from complications of Cystic Fibrosis. Scott was born in Tucson at St. Mary’s Hospital. His childhood was spent in Tucson until 1973 when his family relocated to Butte, Montana. After 4 years in Butte, he moved to Great Falls where he graduated from CM Russell High School. After graduating from the University of Montana with a B.S. in Recreation Management, he returned to Tucson where he began his health and fitness focused career. In December of 1984, Scott married the love of his life, Janet. Together they started Arizona Health in 1985. Scott was passionate about exercise and fitness. His passion guided the business to selling exercise equipment as well as providing personal training to several high-profile clients and prominent members of the community. Scott’s good friend, Lamonte Hunley, joined Arizona Health as his business partner in 1992. After Scott’s diagnosis of CF in 2014, Lamonte carried on Scott’s vision for Arizona Health. Scott was an avid, lifelong sports fan. While he always cheered for his alma mater and supported the Grizzlies, he also loved the Wildcats and never missed an opportunity to Bear Down. Scott’s greatest strength was his ability to make and keep friends. To be a friend of Scott meant to be his brother or sister. From his childhood friendships to his SAE brothers to those he met throughout his life, they were all cherished. Scott was preceded in death by his grandparents, Andrew and Regina Thompson; and Ralph and Eva Scalpone; his father Robert Thompson; his mother Barbara Malmquist; and his father-in-law Neil Keefer. He is survived by his wife Janet, sister Bonnie Storrs, brother Victor (Christina) Thompson, step-brother Bill (Doris) Malmquist, step-sister Rebecca New, step-father David Malmquist, mother-in-law Winifred Keefer, sister-in-law Judy (Lorin) Bromeling. Scott loved his nieces and nephews and prided himself on being the best uncle ever to Brittni (Ben) Rawlins; Marissa Storrs; Taylor, Makayla, and Elle Thompson; Jennifer (Dallas) Trygstad; Kristy (Cody) Welbig; Kyle (Katelyn) Young; Priscilla New; Autumn Malmquist; as well as his grand nieces and nephews Neil, Nora, Mac, and Brayden. Services will be held on Tuesday, December 10, 2019 at 2:00 p.m., St. Francis in the Foothills UMC, 4625 E. River Road Tucson, AZ. In lieu of flowers, donations can be made to the Cystic Fibrosis Foundation, https://www.cff.org/give-today/.

Scott Thompson died on November 27, 2019 at the age of 58 from complications of Cystic Fibrosis. Scott was born in Tucson at St. Mary&#8217;s Hospital. His childhood was spent in Tucson until 1973 when his family relocated to Butte, Montana.... View Obituary & Service Information

The family of Scott R. Thompson created this Life Tributes page to make it easy to share your memories.

Send flowers to the Thompson family.